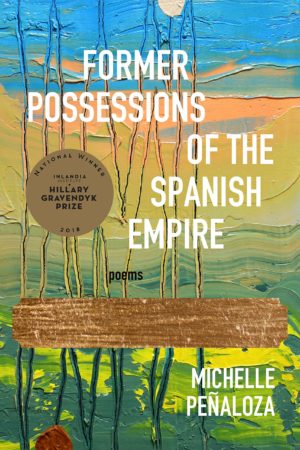 Michelle Peñaloza is the author of Former Possessions of the Spanish Empire, which won the 2018 Hillary Gravendyk National Poetry Prize and will be published in August 2019 by Inlandia Books. She is also the author of two chapbooks, landscape/heartbreak (Two Sylvias, 2015), and Last Night I Dreamt of Volcanoes (Organic Weapon Arts, 2015). Her poems can be found in Prairie Schooner, Pleiades, Third Coast, New England Review, and elsewhere. She is the recipient of fellowships and awards from the University of Oregon, Kundiman, 4Culture, Artist Trust, Jack Straw, and the Richard Hugo House, as well as scholarships from VONA/Voices, the Napa Valley Writers Conference, Vermont Studio Center, and the Bread Loaf Writers’ Conference, among others. Kundiman fellow and a graduate of the University of Oregon MFA program, Michelle won the 2019 Scotti Merrill Emerging Writer Award for Poetry from The Key West Literary Seminar. Michelle lives in rural Northern California.