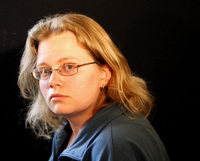 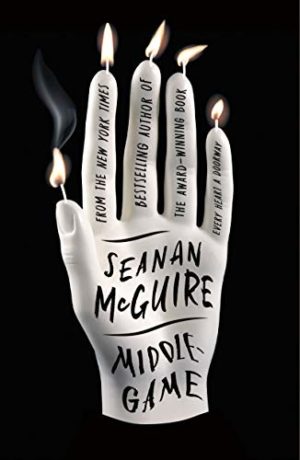 New York Times bestselling and Alex, Nebula, and Hugo-Award-winning author Seanan McGuire introduces readers to a world of amoral alchemy, shadowy organizations, and impossible cities in the standalone fantasy, Middlegame.
Meet Roger. Skilled with words, languages come easily to him. He instinctively understands how the world works through the power of story.

Meet Dodger, his twin. Numbers are her world, her obsession, her everything. All she understands, she does so through the power of math.

Meet Reed, skilled in the alchemical arts like his progenitor before him. Reed created Dodger and her brother. He’s not their father. Not quite. But he has a plan: to raise the twins to the highest power, to ascend with them and claim their authority as his own.

McGuire (the Wayward Children series) puts a genuinely innovative spin on the magical child horror novel in this mesmerizing story of two gifted, telepathic children and the unsettling source of their powers. Massachusetts seven-year-old Roger Middleton is struggling with his multiplication worksheet when a girl’s voice pops into his head and gives him the answers. Dodger Cheswich, his mental correspondent, lives in California, and Roger is soon able to reciprocate her assistance when she shares that her academic struggles are with reading and spelling. Roger has an intuitive connection with words that’s as strong as Dodger’s with numbers. As their relationship develops, the two remain unaware that they are pawns in a larger game initiated by James Reed, the son of Victorian alchemist Asphodel Baker; Reed and Baker aspire to create human incarnations of Pythagoras’s Doctrine of Ethos, which concerns humanity’s ability to command nature. As Roger and Dodger grow up and explore their more terrifying abilities, their investigation into their origins puts them in danger. Heightening the tension is a prologue set “five minutes too late” and “thirty seconds from the end of the world,” in which Dodger is bleeding to death as Roger takes desperate measures to save her. Shifts and alterations in timelines demand close attention from readers, but McGuire’s rigorous plotting pulls everything together by the end. This is a fascinating novel by an author of consummate skill. — Publishers Weekly – May

SEANAN McGUIRE is the author of the Hugo, Nebula, Alex and Locus Award-winning Wayward Children series, the October Daye series, the InCryptid series, and other works. She also writes darker fiction as Mira Grant. Seanan lives in Seattle with her cats, a vast collection of creepy dolls, horror movies, and sufficient books to qualify her as a fire hazard. She won the 2010 John W. Campbell Award for Best New Writer, and in 2013 became the first person to appear five times on the same Hugo ballot.