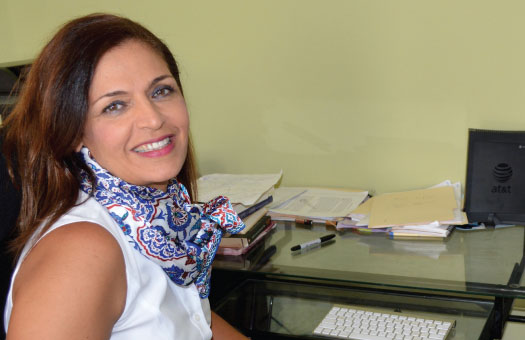 John Murray: What prompted you to sit down and write your memoir?

Azadah Tabazadeh: In 2005 Time published an article about my scientific research as a part of an Innovator Series. The reporter, Madeleine Nash, also took interest in my personal life and asked questions about it during the interview. She ended up including a few quotes about my personal life in the article, which resulted in my receiving “fan” mail/email for the first time in my life. In particular, an official letter from Richard Delay, the Mayor of Chicago in 2005, really touched my heart and made me think of my past and the possibility that people like him may want to know more about me as a person, not just my professional life. I began writing short stories at nights and during weekends for five years before singing up for a memoir class to polish my stories and turn them into a book. Although the letter from Richard Delay and a subsequent postcard from my uncle regarding the Time article prompted me to begin writing my stories, it was the lost friendships in Iran and the lack of closure that sustained me throughout the writing process.

JM: What source material did you use while writing (memories, journals, family, etc)?

AT: I read a lot of books and articles about the Iranian revolution and watched many YouTube videos to piece together my memories to the best of my ability. For example, I was able to find a YouTube video regarding the protest on International Women’s day (March 8, 1979) against veiling, descried in my memoir, which my mother and I attended. The video helped me a great deal in writing the details and dynamics for that scene. I also interviewed many people who lived in Iran during that period, including my family and friends. In particular, my mother Azar has a very good memory. Therefore, she was able to assist me in constructing past events, especially regarding our escape from Iran, as my parents and sister Afshan fled Iran five months after my brother Afshin and I did, traveling along the same harsh landscapes.

JM: What was the most difficult aspect of writing your memoir?

AZ: Recalling tragic events that happened in my life and revealing truths about myself that I felt ashamed of. However, I tried to balance that out with joyous and/or curious events that often involved some type of scientific learning and/or experimentation or internal struggles with my own faith.

JM: Do you have any plans for a second book chronicling the time between landing in America and becoming a respected scientist?

AZ: I have in fact written many chapters about my experiences in America. However, after careful consideration, I decided not to include that time period in this book because that inclusion would have taken away from the story that I wanted to tell—the story of many people who lived during that tumultuous time in Iran. My struggles and triumphs in America as a woman succeeding in a male-dominated field is a different story, which I would like to write with that “story arc” in mind.

JM: What do you want readers to take away from your story?

AZ: I hope the readers feel more connected with people from Iran or the Middle East in general after reading my book—as I strongly believe stories are what connect people, not the policies of their respective governments. The picture of Iran and Iranian people that are portrayed in the media is not all what I have experienced in my life while living in Iran or the United States.

JM: The gift of the chemistry set and textbook seemed to be the major catalyst for your love of and talent in science. What led to the shift from chemistry to geology/weather?

AZ: My actual scientific research is very much chemistry-based as my specialty is in atmospheric chemistry. In short, I discovered a number of important chemical mysteries occurring in the Earth’s atmosphere, which I hope to write about in my second book. I believe I would not have been able to make the discoveries that I did if I had not majored in physical chemistry. Nowadays, scientific disciplines are not as exclusive as they were in the past. In fact, the most important discoveries are made when scientists and engineers from different backgrounds work together—at least that is the case with NASA where large teams are often assembled to achieve common goals that lead to major scientific breakthroughs across various technical and scientific disciplines.

JM: What books do you recommend for readers wanting to learn more about Iran, science, or female scientists?

AZ: I recommend two Iranian-American authors who mainly write fiction: Gina Nahai and Anita Amirrezvani. I have read and loved all their books and learned a lot about Iran’s history by reading their works. “Persepolis” by Marjane Satrapi and “Persian Girls” by Nahid Rachlin are the best educational Iranian memoirs that I have read. I highly recommend “Obsessive Genius: The Inner World of Marie Curie” by Barbara Goldsmith to young women who are interested in pursuing science as a career. A second book that I very much enjoyed reading regarding women and science is: Nobel Prize Women in Science: Their Lives, Struggles, and Momentous Discoveries by Sharon Bertsch McGrayne.

JM: Were you ever able to reconnect or learn what happened to Najmieh?

AZ: Unfortunately, I have not been able to reconnect with Najmieh. The last information I have from her was the letter she mailed me in 1978. Given the fact that Najmieh is most likely not Internet savvy and I cannot go back to Iran, I may never reunite with Najmieh. That’s a hard fact to swallow, but unless the Islamic regime falls I have no way of finding what happened to Najmieh because I cannot go back to Iran and look for her.

JM: Knowing what you know now, would you have any advice for your younger self? If so, what?

AZ: I would tell her that life is like a sine function with oscillating ups and downs. Don’t make any rash decisions when you are at your lowest point because the next peak is only an oscillation away.

JM: Since publishing your story, have you returned to Iran?

AZ: I can’t go back to Iran for two reasons. First, I left illegally. Second, my memoir portrays an unfavorable view of the current regime.  Thus, the Iranian officials can come up with many excuses to throw me in jail, and there isn’t a thing anyone can do, including the government of the United States, to help me if that happens.

JM: What do your friends and family feel about the book?

AZ: I believe they are mostly pleased with it, as I haven’t heard anything negative from anyone yet. Before the book was published my father Moji would tell our story to any “unsuspecting” individual who was willing to lend his ears to him for a few hours or more. Now, he just gives a copy of my book to “seemingly” interested parties and says, “My daughter wrote this book about our life in Iran. I am very proud of her. She even took me to the White House …”

READ our review of The Sky Detective